As I write this, we are in very different, interesting and strange times!

Yes, I am in the French Alps at the TAG Ride Headquarters, but nevertheless snow at this time of year is a little early. Now, it is not unusual at all to see snow high up above the tree line in late summer and Autumn, but to have snow down to 1300 metres is not your normal state of affairs! I can only imagine how grateful the organisers of the Tour de France were that the snow did not arrive one week earlier.

Anyway, the early snow has given me some time to sit back and reflect on the last 12 months.

Back to Covid-19. Unfortunately TAG Ride did not see many visitors to the French Alps this summer but let us look forward to summer 2021! Hopefully, many of you will be itching to get out to the Alps and get some serious climbing into your legs whilst taking in the sights of our beautiful Cols.

The landscape and scenery of the Savoie and Haute Savoie regions are nothing other than magnificent and remarkable. Plus, with the new legendary Col de La Loze on our doorstep, this has to be experienced along with the more familiar classics, the Madeleine, Petit St Bernard, Alp d’Huez and the list goes on.

(if you are looking for more inspiration, head over to our soon to be updated ride with us section and gallery)

What a difference a week makes! 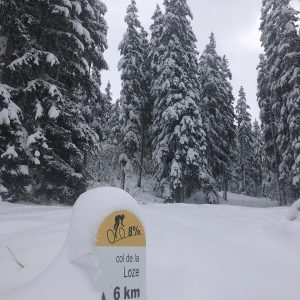 But, as they say, the show must go on and after a herculean effort by organisers to keep riders and spectators alike safe, the TDF 2020 has just finished and what a finish! Certainly one of the more memorable in recent history.

And a rarity in 2020, we can say that it was not just covid-19 making the headlines.

From the moment the riders set off on the latest Grand Depart in Le Tour’s 107 year history, it was the action on the roads that took centre stage.

The drama began on the heavily rain affected stage 1. The atrocious weather combined with the slick surface took a heavy toll and saw numerous riders get all too acquainted with the tarmac including Sam Bennett and Julian Alaphilippe. To be honest as a cycling fan it was a little hard to watch. Thankfully a rider led neutralization of the stage from the last descent of the Côte de Rimiez until 25km to go restored a little order.  And once racing resumed Alexander Kristoff took the Tour’s first yellow jersey with a perfectly timed sprint finish.

The action commulated on the penultimate stage 20, the 36.2km individual time trial that so shaped the final result. Rogic entered the stage on Saturday with a 57 second lead over compatriot Tadej Pogacar. A pretty comfortable cushion for a time trialist of his quality who was showing no sign of weakness coming out of his impressive performances in the Alps.

The deficit just seemed too large to overcome but by 14.5 km and the first intermediate Pogacar had taken 13 seconds out of Roglic’s lead. By the second checkpoint and with just under 6km to the finish, Roglic’s lead was down to 21 seconds and the race was on. As the riders battled up the Planche des Belles Filles, Pogacar went from strength to strength and went on to take nearly 2 minutes out of his adversary on the stage!

An incredible finish No one really saw that coming. Or did they?

Tadej Pogacar has been exceptional over the last 2-3 years. I saw him in the Tour de l’Avenir in 2018 and he went on to win the race. The TdF 2019 victor Egan Bernal won it the year before. In 2019, Tadej won the Tour de California and was 3rd overall in the Vuelta a Espana. He finished 4th in the Criterium du Dauphine this year and of course he narrowly beat Roglic to the Slovenian national time trial title in June, the form was there.

The events of the last 9 months or so are also set to have a knock on effect for the 2021 schedule and not just cycling!

The Grand Depart was scheduled for the 3rd July 2021, in Copenhagen kicking off with a time trial followed by two more stages in Denmark. However, due to the dreaded ‘C’ word and maybe influenced by a clash with the postponed ‘Euro 2020’ (now ‘Euro 2020+1’ I guess) has already been moved to start in Brest in  Bretagne. Denmark will now host the start in 2022.

In fact, the first 4 stages will be in the Bretagne area, then the rumours are the Tour will head towards the Macon area and Chalon-sur-Saone. We will have to wait another few weeks to see if these rumours are actually true.

Brest has held the “Grand Depart” three times already and this fourth will be a record for a French town other than Paris.

The Tour will be starting a week earlier than usual because of the rescheduling of the Olympics and the European Championships.The Olympic road races which are traditionally held at the start of the games are now scheduled for 24th and 25th of July. This was in direct conflict with the final week of the Tour. Although, the UCI officially requested a change of the road racing dates during the games the IOC refused.

I am sure we are all desperately hoping for a return to “normal service” next year, but I do think there are some positives to be taken from this year.

Firstly, in difficult times, the Amaury Sport Organisation succeeded in running an enthralling but most importantly safe Tour, showing that we can adapt and move towards a return to the norm.

And more importantly, cycling as a whole has seen a huge growth in participation. I think that we can all take some pleasure in seeing more people introduced to this wonderful sport/addiction.

So hopefully on a positive note, here’s to next year, keep pedalling and moving forward.

Look out for our announcements after the Tour de France presentation on Thursday 29th October. Which incidentally, is also a week later than normal !!

A – Alp D’Huez.   Infamous for it’s 21 bends. Very tough climb at the start and one that nearly all cyclists would like to say they have climbed !     B – Beaufort.   This is a fabulous little town at the bottom of the Cormet …

With You All The Way!

Our support vehicle is an ever-present fixture; carrying spares, snacks, gels, extra layers and even you (if required)! Find out more about our ride support here.

Well make sure you stay well fuelled with a daily lunch stop at a mountain restaurant or scenic picnic spot!

We love to chat so please don’t hesitate to contact us at tagride@thealpinegeneration.com or +44 (0)20 7191 1120 if you have any questions about any of the trips we have scheduled for this year, or if you have something slightly different in mind. We can help plan and organise tailored trips for groups of friends or cycling clubs.